Increasing Warehouse Productivity by 14% is Easier Than You Think

You get to work, pour your morning coffee and before you know it, it’s 5 o’clock and your to-do list hasn’t gotten any shorter. Sometimes it seems like no matter how dedicated you are to your work, there’s always more to be done. You know the saying, “work smarter, not harder”? This may make you think that the secret to increasing productivity lies in how you do your work but this is where you’re wrong…well, kind of wrong. It isn’t just what you do but it’s the tools you use that help you get more work done in less time.

We know as manufacturers you are under constant pressure to reach production targets and if any unexpected downtime occurs due to communication delays, it’s going to cost you. As much as 30-40% of profits can be lost annually due to unplanned downtime, and even though the warehouse tool belt with all the gadgets makes everyone feel like Batman, you know in the back of your head that there has to be a better way, right?

Introducing Zebra Technologies’ latest breakthrough in warehouse mobile computing: The TC8000 Touch Mobile Computer. The TC8000 was specifically designed by Zebra Technologies’ top engineers to be the most efficient, productivity-enhancing tool of its kind on today’s market. Combining the features of a scanner with the abilities of a computer, you can make your “bat belt” more efficient, adding an extra hour of productivity per worker to every workday.

Light in weight but not in functionality
The TC8000 is ergonomically designed to be up to 38% lighter than traditional mobile computer models, helping to reduce muscle fatigue. Lighter on your muscles does not mean lighter in functionality though, as this device features a revolutionary screen that faces the user while scanning, eliminating the need to tilt and verify each scan. Building on the reduction in muscle fatigue, the screen design reduces 55% of wrist motion and 15% in muscle effort, helping you to literally do more with less physical effort.

The past called… they want their buttons back
Speaking of this revolutionary screen design, this mobile computer features all-touch screen technology. The all-touch virtual keypad enables users to type up to 40% faster with 60% fewer errors compared to the traditional push-button keyboards. Workers can either use their finger, a stylus, or a gloved finger to interact with apps and data input options.

Still need more proof that the TC8000 is truly engineered for maximum productivity?
Here’s a feature that is an industry-first for warehouse mobile computers: multi-modal design that allows for hands-free scanning. The imager on the TC8000 automatically enables a trigger by the proximity sensor, whether the device is worn on your belt, a shoulder strap, or in the warehouse vehicle. With game-changing battery management features, the TC8000 has the largest battery in its class, giving ample power to extend up to three shifts, along with a hot-swap battery design that allows workers to quickly change to a charged battery seamlessly, without stalling productivity to power down the device.

The cherry on top
As if the advances in device weight, screen design, and battery management weren’t enough, the TC8000 also features SimulScan, making it that much easier for workers to capture labels on boxes and pallets that contain multiple barcodes, in addition to text fields, signatures, and other information on printed forms.

More details
The TC8000 Touch Mobile Computer is a product of Zebra Technologies, a partner of Nova Communications. To learn more about the TC8000 and other products to help improve warehouse productivity, download the free manufacturing e-book through the link below. 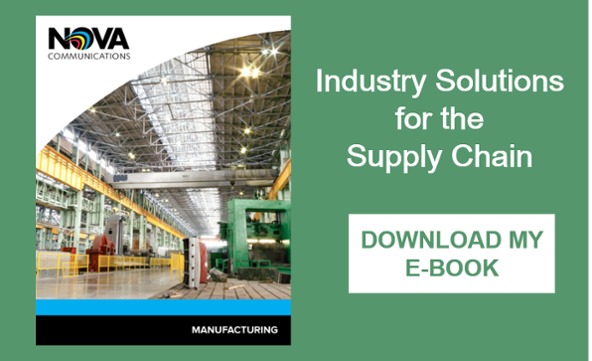