As someone who works in an industry requiring employees to work in physically and environmentally tough conditions, you need to have durable two way radios to properly communicate. The last thing you want are radios that don’t work because they can’t keep up with excessive dust, high levels of heat, or extremely cold temperatures. 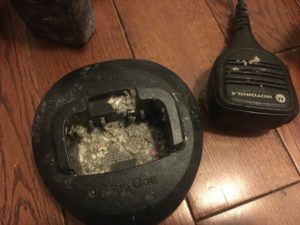 A Nova Communications customer had a house fire that destroyed their house. The Motorola two way radio and batteries inside stood up to the fire and continued to work afterwards.

Motorola has become the leader in creating two way radios you can depend on for holding up under all the conditions listed above, plus more. The durability of Motorola two way radios isn’t something to take the company’s word for on paper. They make sure your radios stay durable through meticulous design research and testing.

Yet, how do you really know your radios are fully durable? It’s time you learned about what Motorola does to take durability seriously. They’ve produced the toughest radios ever made, including the very first two way radio used in World War II.

Because these radios have literally gone to war, you can count on them making it through the harshest environments for workers across Canada.

Take a look at Motorola’s commitment to durability through their specific actions.

One thing Motorola has continually done is evolve their radios through extensive research based on industry users. This includes going out with the product users in the most difficult environmental situations and understanding the wants and needs in various industries. They’ve gone straight to industries they serve, and worked with them to understand what users demand in radios to withstand unique situations.

People who work in emergency services, oil and gas, manufacturing, warehousing, construction and transportation are frequently exposed to various tough elements other radios can’t endure. By surveying employees in these industries, you get exactly what’s needed from Motorola products, and this continually evolves.

The two way radios Motorola released in recent years have a guarantee of being up to date on the latest industry challenges. This means withstanding harsher temperature changes, more intense moisture, and even being dropped. With some models, waterproofing is available.

With the latter above, Motorola does extensive testing, and not just one time.

To fully assure their two way radios pass endurance tests, Motorola does real-world testing so there isn’t any second-guessing on what could happen. It starts with their drop tests, which other companies may only do a few times for a pass.

Motorola drops their two way radio 42 times on concrete to ensure it withstands impact. This might sound obsessive, but it’s the only way to truly know durability quality. Every radio in the company’s inventory have had this test, though this method isn’t the only one conducted.

Shock tests occur as well where technicians zap the radio with static electricity 260 times. Doing so assures the battery inside each radio continues to function.

Vibration tests are also done – and aren’t taken lightly. Each radio goes through 12 strenuous hours of intense vibrations so you know those who use forklifts or other heavy equipment can keep their radios working.

To show how thorough Motorola takes their testing, they place their radio batteries under the same conditions. Batteries in these tests include non-IMPRES and IMPRES batteries, which covers the types all Motorola radios use.

Through drops, electricity voltage, and vibrations, they make sure all batteries hold up in the worst situations. Since you’re dependent on reliable power to make your radios work, you won’t have a useless radio or have to replace batteries on a constant basis.

Choosing the Right Radio for Your Work Environment

Conditions in work environments vary widely, though Motorola always has a two way radio available to tackle nature’s fury. Here at Nova Communications, we sell all Motorola products, and we’re here to make sure you receive a radio holding up under your specific industry.

For example, if you need a radio to withstand water, our team is there to help you choose the right radio model with enough waterproof capability to meet your demands.

Contact us to see our extensive Motorola radio inventory and bring the durability your on-site or field workers require.